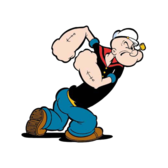 Hello Friends, If the stories my parents told me are true, this morning at sometime around 2 AM EST,